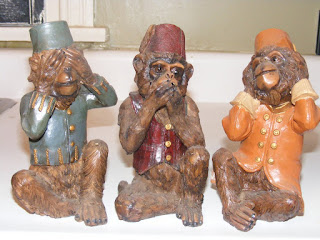 Nope, I'm not talking about my three children, however, that is a great description of them. My three little monkeys are quite different. I was presented with the question of what in my house is a meaningful object? I immediately thought of these monkeys. I have tons of meaningful items from my children and honestly, after thinking about it, I'm surprised that I didn't choose one of those items...but no, I had to go with these monkeys.

A bit of history...I don't know how long my mawmaw Steele had these, I just remember seeing them even as a young girl. These three monkeys always intrigued me. The first monkey is covering his eyes, referencing See No Evil. The second monkey is covering his mouth, meaning Speak No Evil. And last but not least is the third monkey, covering his ears so that he will Hear No Evil. Every time that I was at her house, I would ask her if I could have these monkeys if she ever got rid of them. I never thought that I would actually get them.

About three years ago, my mawmaw started having more and more health problems. One day my mom called and told me that she had something for me. She wouldn't tell me until I saw what it was for myself. There were three items, wrapped neatly in newspaper...yes, those three little monkeys that I had long adored. I couldn't believe it. My mawmaw had actually sent them to me. Out of seven children and too many grandchildren and great-grandchildren to count, she had remembered my simple request. I was not the closest grandchild, nor was I the favorite. I had put my mother through hell as a teenager, but somehow, my mawmaw had remembered all of those years of me asking about those monkeys and she wanted me to have them before she was gone. Tears filled my eyes as I opened each one and saw the precious monkeys.

My mawmaw passed away in February 2009, bless her soul. I only have one thing in my house that was hers, those three little monkeys. They sit on my bookshelf so that I can see them daily and be reminded to See No Evil, Speak No Evil, and Hear No Evil; if only I could live up to what they mean. Every time I glance at those monkeys though, I am reminded of my mawmaw and of the special person that she was and that I was special to her also.

Everyone has a meaningful object in their home. If you would like to tell me about yours, I would love to hear about it. And if not, maybe this gives you a little something to think about-what is meaningful to you?
at August 04, 2010

Connect with Freebies and Savings

What is Prime Wardrobe? Prime Wardrobe is a Prime-exclusive program where you can try before you buy from eligible items across women’s,...

Support Freebies and Savings with PayPal